Following the mass-blocking of millions of IP addresses in the battle against Telegram, Roskomnadzor, the Russian internet regulator, is now looking at Facebook.

The head of the regulating body of telecommunications, Alexandr Zharov, released a statement in which he expresses their intention to ‘probe’ the social site before the year is out. The statement was published by Izvestia, a Russian newspapers who is known to be in support of the Kremlin.

In the past, the Russian internet watchdog has repeatedly issued warnings to Facebook, as the site was not complying with a Russian law. The law was set in 2014, and it requires non-Russian-owned telecommunications services, social network sites, and search engines to store their data of the Russian user base in the country’s territory. The law has caused a widespread alarm, as people saw it as an opportunity for intelligence services to access the stored data.

In his statement to Izvestia, Alexandr Zarov went on to say that Facebook was not in compliance with the law and that the site had a ‘significant’ delay in delivering the data. He said that the regulating body will be considering a ban on the site if Facebook continues with its refusal to comply. Zharov pointed out that he meets the social site’s representatives twice each year.

The messaging application Telegram features end-to-end encryption, which makes it a popular choice among those who prefer to have secure conversations. The app has long been toe-to-toe with the Russian government, and it first brought the country’s wrath upon itself by refusing to give up the encryption keys, even after a Russian court compelled it to do so.

On Monday, Roskomnadzor has blocked over 16 million IP addresses linked to Telegram, in an effort to ban the messaging app.

Developed by Durov brothers Pavel and Nikolai, Telegram first launched in 2013. It now has 200 million users, a large chunk of whom are Russian citizens. The app was also used by Russian officials, including those working in the Kremlin.

One of the reasons—besides large-scale surveillance—for the Russian government’s crackdown on both Telegram and Facebook is that these social services are frequently used by those opposing Vladimir Putin in order to coordinate civilian movements and protests.

Ali Raza is a freelance journalist with extensive experience in marketing and management. He holds a master degree and actively writes about crybersecurity, cryptocurrencies, and technology in general. Raza is the co-founder of SpyAdvice.com, too, a site dedicated to educating people on online privacy and spying.
@AliR1272
Previous Opera is Retiring its Free VPN for Android & iOS
Next Google Removes Domain-fronting, Bypassing Statewide Block No Longer Possible 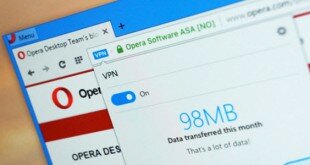